From WS-Attacks
Jump to: navigation, search

XML Flooding aims at exhausting the resources of a web service by sending a large number of legitimate SOAP Messages. This attack can be compared to the classical denial of service attack on web servers by flooding them with a large amount of valid HTTP requests until the server is unable to respond.

The attack is also known under the name XML Flood.

One can distinguish between 2 attack subtypes:

In this attack there is no component in the web service architecture that is specifically attacked. The web service server is attacked as a whole.

The Figure 1 shows an example of Single XML Flooding where one attacker sends as many request as possible to the attacked web service.

Figure 3 shows an Distributed XML Flooding attack where various intermediary clients, controlled by an attacker, send requests to the victim. 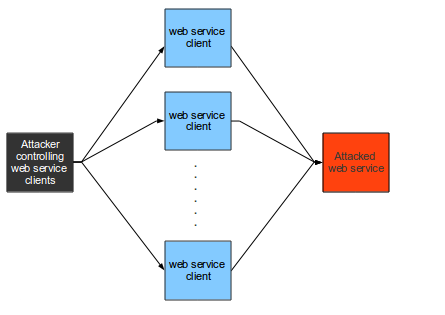 When talking about countermeasures you have to distinguish between the 2 subtypes.

The "Single XML Flooding" attack is categorised as follows:

The "Distributed XML Flooding" attack is categorised as follows: