Web services offer a great amount of flexibility when it comes to using security features like cryptography and signature algorithms; i.e. different parts of a SOAP message can be signed or encrypted with different keys. This flexibility can be used to mount Recursive Cryptography attacks. These attacks aim at exhausting the system resources of the attacked web service. This attack is also known as Oversized Cryptography aka Cryptography DOS aka XML Complexity Attack in Soap Header.

Cryptography Denial Of Service (DOS) attacks can be split in two different but similar attacks:

Instead of giving an example SOAP request with a malicious payload, only a schematic representation of the attack is given. As shown in the graphic, in order get to the final unencrypted key or element all prior encryptions have to be resolved and processed. 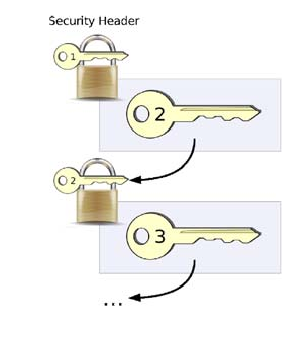 If you have a working example available feel free to add it to the wiki.

"Strict WS-Security Policy Enforcement" has to be implemented by hand by the web service developer.