From WS-Attacks
Jump to navigation Jump to search

XML Encryption typically uses a hybrid encryption scheme to protect data confidentiality. To this end, the data is first encrypted with a symmetric key (e.g., by using an AES-CBC algorithm). Afterwards, the symmetric key is encrypted with a public encryption scheme by applying the server's public key (e.g., by using RSA PKCS1). Servers using Cipher Block Chaining (CBC) mode of operation and RSA PKCS1 are under certain circumstances vulnerable to adaptive chosen-ciphertext attacks. These attacks allow an attacker to recover the encrypted data. In the following, we give a high-level description of these attacks and how they can be applied to XML Encryption applications.

In an adaptive chosen-ciphertext attack scenario, the attacker's goal is to decrypt a ciphertext C without any knowledge of the (symmetric or asymmetric) decryption key. To this end, he iteratively issues new ciphertexts C', C'', ... that are somehow related to the original ciphertext C. He sends the ciphertexts to a receiver, and observes its responses. The receiver acts as an oracle since its responses leak specific information about the validity of the decrypted message. With each response the attacker learns some plaintext information. He repeats these steps until he decrypts C. See the following figure for the description of this scenario. 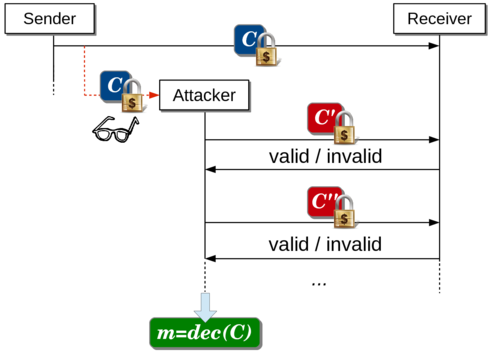 Two major examples of these attacks are Vaudenay's attack on CBC-based symmetric encryption and Bleichenbacher's attack on RSA-PKCS1-based public-key encryption. Cryptographic details behind these attacks are not relevant to this description. It is just necessary to know that the attacks against these cryptographic algorithms are applicable if an oracle is given that decrypts a ciphertext and responds with 1 (valid) or 0 (invalid) according to the validity of the decrypted message. A typical reason for answering with 0 is that the decrypted message contains an invalid padding. Thus, the attacks are also known as padding oracle attacks.

Recently, two works on XML Encryption were published that are based on the attacks of Vaudenay and Bleichenbacher:

The following prerequisites are needed to execute the attacks:

There are several ways to mitigate these attacks: